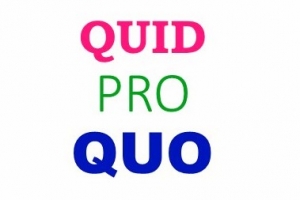 We’ve heard a lot about quid pro quo lately. But it’s not necessarily a bad thing.

Quid pro quo is Latin for “this for that.” This is what negotiation is all about. In fact, the exchange of something of value, legally termed “consideration”, is a requirement for a contract to be valid. Settlement agreements are contracts.

A good negotiator always seeks quid pro quo. Don’t give away something unless you get something in return. In mediation, parties take turns lowering demands and increasing offers until we reach settlement.

The exception to this rule is if you were legally obligated to do something. Then it is improper to seek compensation for it. For example, an employer is legally required to pay the ordinary and customary medical expenses of an employee who suffers a work-related injury. In an ongoing case, it would be an improper quid pro quo to ask the injured worker for anything of value in return. The thing of value might be money or an agreement to do something in an unrelated context the worker would not otherwise do. That could include sexual favors.

Parties can enter into any contract which is not illegal. Hiring a hit man to kill your enemy is not a legal contract, no matter the agreed amount of compensation.

What About Leverage?
Leverage is different from quid pro quo. A party has leverage in negotiation when that party has the better alternative to a deal. How badly does the negotiator need the deal? For example, an individual who needs money for basic living expenses is likely to accept a settlement of less than full value in order to expedite closure.

In litigation, each party is negotiating to obtain a quid pro quo, a certain amount of money now in exchange for a release of the claim. When one party is in the better position to wait out the full life of the claim, that party has leverage. Frequently that is the insurance company/defendant. However, many insurers are anxious to close “old dog” claims. In that situation, the claimant has leverage and can demand more to settle. Uncertainty about how future events, such as medical treatment, can affect the value of the claim, giving one party more leverage than the other.